1. Instruments you play and when you started playing

I’ve sung since ever since I heard my mom harmonizing to the Beatles when I was a kid. I got a guitar from my Uncle as a Confirmation of Baptism present when I was 14. I always thought guitar was the coolest thing on the planet—FAR TOO COOL for me to play. My uncle was cool (still is) but I was not. Still, I played every day the first 6 years and eventually learned how to play the thing.

2. When you started writing songs - approximately how many you've written --and how many of those are "good songs" for public performances in your opinion.

I wrote poetry in 9th grade based on mostly Metallica, but when I started playing guitar a year later my tone softened and I moved into love songs and really just playing with imagery—rainbows, gargoyles, splashing puddles, lightning storms, cherry blossoms blowing through the air. I kept trying to capture feelings by personifying them as vivid images. That’s what led to my first album title: Mirage.

Since 1999 I’ve written close to 700 songs. I play around 130 in public. Many of the others are only a couple of verses or have some profanity that I prefer not to play for others—I like to keep things emotive, without being volatile or offensive. Words have so much POWER in them. But I find profanity shuts people out more than it emphasizes a point. There are better—stronger—images than cuss words. (In most cases, anyway )

3. Your favorite Song you've written (or top 5) and a little bit about it and why.

SONG 1. Tears of Derision This song sounds like Radiohead’s “High and Dry” because that song inspired this one. It’s about different people seeing the same picture, or hearing the same song, reading the same book, sharing the friend, but each person having a completely different experience because they relate differently. My favorite line is in the chorus. “We both smiled… for different reasons”

SONG 2. Another Love Song. There’s a Beatles song that says something like “I’m sure you’ve heard enough of silly love songs, but too bad. Here I go again—I LOVE YOU!!!” I hate that song. Drives me crazy. But this is a song about “another kind of love. The love we have for our friends. You know, the people who are there no matter what. People get obsessed with finding Romantic Love and often times forget how Friendship sustains them even on that other quest. This one’s for you friends! Musically it reminds me of a Nick Drake doing a cover of James Taylor’s “Fire and Rain” while singing the lyrics to “You’ve got a friend”

SONG 3. Already Perfect. There’s an Egyptian proverb: “A beautiful thing is never perfect.” This is a song about loving a person. It’s about seeing all of her. Not demanding anything. It’s about knowing her intimately and only treasuring her. It’s my perfect love song for my perfect wife. –I’m not saying she has no flaws. I’m saying that I love with all her flaws. It’s almost all finger picking and the riffs and chord progressions do beautiful things.

SONG 4. Making Moments This is a very new song—written 2 years ago. It’s about Christmas. But the feeling more than the holiday. People request that I play this all year long—which is exactly what I was going for in the song. Capture the Christmas Spirit and make it more Universal. The Chord progression has lots of 7th chords and resolutions. It kind of sound like something Jason Mraz would do.

SONG 5.Back to You This one really encapsulates my journey as a musician. I’m a Christian and I grew up in a Christian home, but didn’t like much Christian music—not that I gave it much of a chance!

I grew up listening to The Beach Boys, The Jackson 5, Herman’s Hermits, Credence Clearwater Revival, James Taylor, Elvis, and the Beatles. No interest in music past 1975 (Except Michael Jackson—as a loyal fan). When I was in 7th grade I heard Smashing Pumpkins’ “Tonight, Tonight” and the strings, dynamics, and passion of the song grabbed me by the heart! I became obsessed with the band—which led me into Grunge music—and Metallica. Still no Christian music.

But when I started writing songs, I kind of felt guilty for a while for not writing “Christian Music”. Once people started enjoying and validating my songs about love, depression, and dancing in the rain, I thought I should use my talent to praise God. But that didn’t come easily. I had all of the riffs of Metallica and the 7th chord progressions, but couldn’t figure out how to blend it with lyrics to praise God. So I continued to just focus on emotions and word pictures.

It wasn’t until a decade later, when I looked back over my catalogue to see that I had Christian references throughout several of my songs (The Rock and a Hard place of Pontius Pilate, Having God smile at the beauty of a sparrow just being herself, or seeing God paint the city gold during a sunrise) . Then I realized that I am a “Christian Artist”. It doesn’t matter that I don’t look or sound like “Christian Music”. God gave me the unique talent to be Ryan. That’s who he wants me to be.

The cool thing about this song is it’s basically a love song to God. And one of my favorite things about it, is that even though it’s called “Back to You”, it’s more about learning that he’s been with me the whole time.

4. Your largest Audience and your average audience.

Largest was 1,500 at a conference at Aberdeen South Dakota. I’ve played a few festivals with 300 to 500. But most of my coffee shop gig are around 6 people. (5 without the Barista.)

Ready to Play "Ready to Wash" 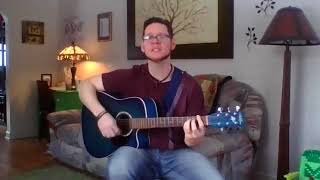 Writing a Song with the Man in the Moon